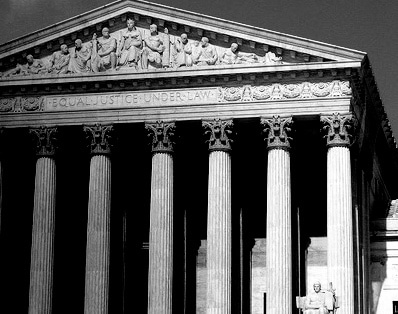 (*the “s” in supreme Court is small in the Constitution itself.)

The supreme Court has refused to intervene and has allowed California’s governor to tell churches how they can meet and how many Christians can meet together at a time.

The supreme Court is wrong. Again.

If you take time to review history, you will see it has been wrong and sustained evil scores of times in their issued opinions and rulings. From slavery to the murder of the preborn. From forced sterilization to the perverting of marriage. The Court declared prayer in the schools an illegal act, and removed the 10 Commandments from all public venues. They did all this through raw judicial power.

Oh, and through the compliance of the people and their lesser magistrates – state, county, and local governments. All have complied. They act as though they must obey; that they can do no other.

The federal judiciary and the supreme Court has been dragging this nation into hell for decades now. And the churchmen (pastors and ministers) in this nation have aided and abetted it all. Romans 13 you know.

Oh, there are a few that spit and fume, but in the end, once the Court has ruled, they – like the magistrates – hide behind the slogan, “The supreme Court has ruled – all we can do is obey.”

Because the whole nation thinks they are beholden to the supreme Court, evil grows.

Rather than just obey God and meet anyway, churchmen run to a lawyer (like they did in this case) to help them. Yet time and again, the Court does evil. The Court sides with the wicked and wickedness. The Court issues opinions and rulings repugnant to the Constitution. The Court openly impugns God’s law and Word.

And all comply. All conform.

Judgement begins in the house of the Lord. I have waited a long time to see a showdown between the church and the state in this nation. Usually, when laws are made or the courts rule, they make an exception for the church and religious organizations. OK that the rest of the nation be abused and subjected to immorality and injustice – as long as the churches do not have to participate in it.

The churchmen love it so.

There are three kinds of churchmen in America. First, the vast majority will comply with anything the state declares – as though the voice of the state is the voice of God. They proffer a perverse rendition of Romans 13 to guise their cowardice and their lack of fealty to Christ. They can always find a reason to justify their obedience to the state. Daniel should have complied and not prayed – the king’s order was only 30 days you know.

The second group consists of those mentioned above who spit and fume. They find a lawyer. They find a technicality like the stores are able to have 50% capacity and the churches only 25% and make that their issue. They go to the state with hat in hand begging an indulgence – like – you can sit in your cars, in your church parking lot, with your windows rolled up, and have church. And that is considered a great win.

Christians have always confronted the evils, idols, and tyrants of their day. This is the history of Christianity.

And such a confrontation must be birthed in repentance.

The pastor of the church that brought the case pointed out in a news interview that churches were sandwiched in between movie theaters and sports leagues in the governor’s order.

We must with weeping hearts confess that Christianity in America has made itself irrelevant. We have not been the salt of the earth as Christ calls us to be. American Christianity decided it preferred to be the sugar of the earth. Being liked became predominant.  Jesus said if we refuse to be the salt that we are “good for nothing but to be thrown out and trampled underfoot by men.”

Here is my plea to my fellow churchmen – just obey God, not man.

“To obey man in anything contrary to God or His precepts, though he be in highest authority, is no obedience at all, but disobedience.”
– Christopher Goodman, 1558

Matthew Trewhella is the pastor of Mercy Seat Christian Church (http://MercySeat.net) and author of the book The Doctrine of the Lesser Magistrates (http://DefyTyrants.com).  He and his wife Clara have eleven children and twenty-two grandchildren. They reside in the Milwaukee, Wisconsin area.

An Examination of Romans 13.

Join our email list – stay informed and minister with others.