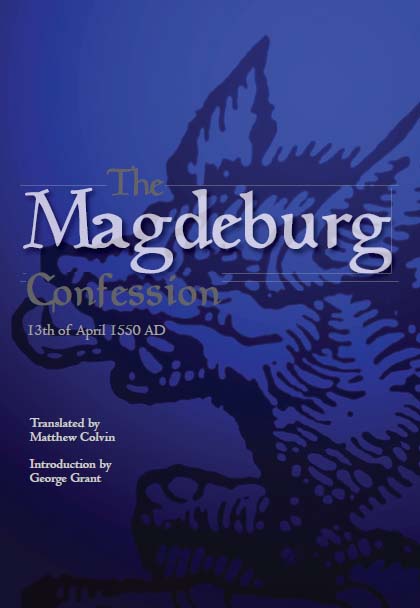 “The truth is not conquered by strength of arms. Military victory cannot change anything about what is true nor does it always accompany the truth.”

This is part one of a two part article by Dr. Christian Preus simply entitled Lessons from Magdeburg. Many good and powerful insights are made about the stand the Magdeburgers made against tyranny due to their love for and fealty to Christ.

At Defy Tyrants, we are so thankful to see how churchmen have been writing and speaking about the Magdeburgers since we published the first-ever English translation of the Magdeburg Confession in 2012.

May Christ be praised!

Click here to read Part 1 of Lessons from Magdeburg.

An excerpt from the article: The Magdeburgers were not pessimistic. The confession of the church is never pessimistic. We are the church militant, so we fight. But we fight with the outcome of the battle already determined, that the head of the serpent is crushed, and that every knee will bow to our Lord in heaven and on earth and below the earth, and every tongue confess that Jesus Christ is Lord to the glory of God the Father. So the Magdeburgers, as military defeat seemed to loom over them and they’d been abandoned by the other cities and had every earthly reason to be pessimistic, the Magdeburgers write, “The enemy’s recent victory should not give them occasion to condemn Luther’s cause or to be overly haughty, nor should it lead the pious to be overly distressed. The cause of the prophets, of Christ, and of the apostles first truly began to come to light in their oppression, and they themselves began to be more glorious after their death. For this purpose, in fact, God appointed His prophets and apostles, that they might go forth and bear fruit, and that their fruit may remain, that He himself might work power from their weakness, life from their death, glory from their shame, and planting from their being uprooted. And so Luther himself also, though dead, lives to eternity, and the fruit of his work, like the dead man himself, as it were, lives, will live, and will shine to all ages, among still more nations.” That was written while troops surrounded their city and defeat seemed a foregone conclusion. And it smacks of optimism grounded on the reality of God’s Word.

Second, the Magdeburg Confession teaches us that the church and her members are called to make certain confessions at certain times. Obviously we confess the creed every Sunday. Obviously we confess throughout the Church year the incarnation of our Lord, His death and resurrection, His ascension into heaven, the sending of the Spirit, the reign of the holy Trinity over His Church. This is simply our life. But circumstance forces specific confessions. Luther, for instance, was called before the Emperor and told to recant his writings, and he made the good confession and refused to withdraw a word. St. Peter was brought before the Sanhedrin and told to stop preaching Jesus, and he said, “We ought to obey God rather than man” (Acts 5:29). The Magdeburgers were told to worship like Roman Catholics and they answered by burning everything outside their city, locking their gates, and putting up armed resistance to the Emperor, together with their great Confession published during the siege.