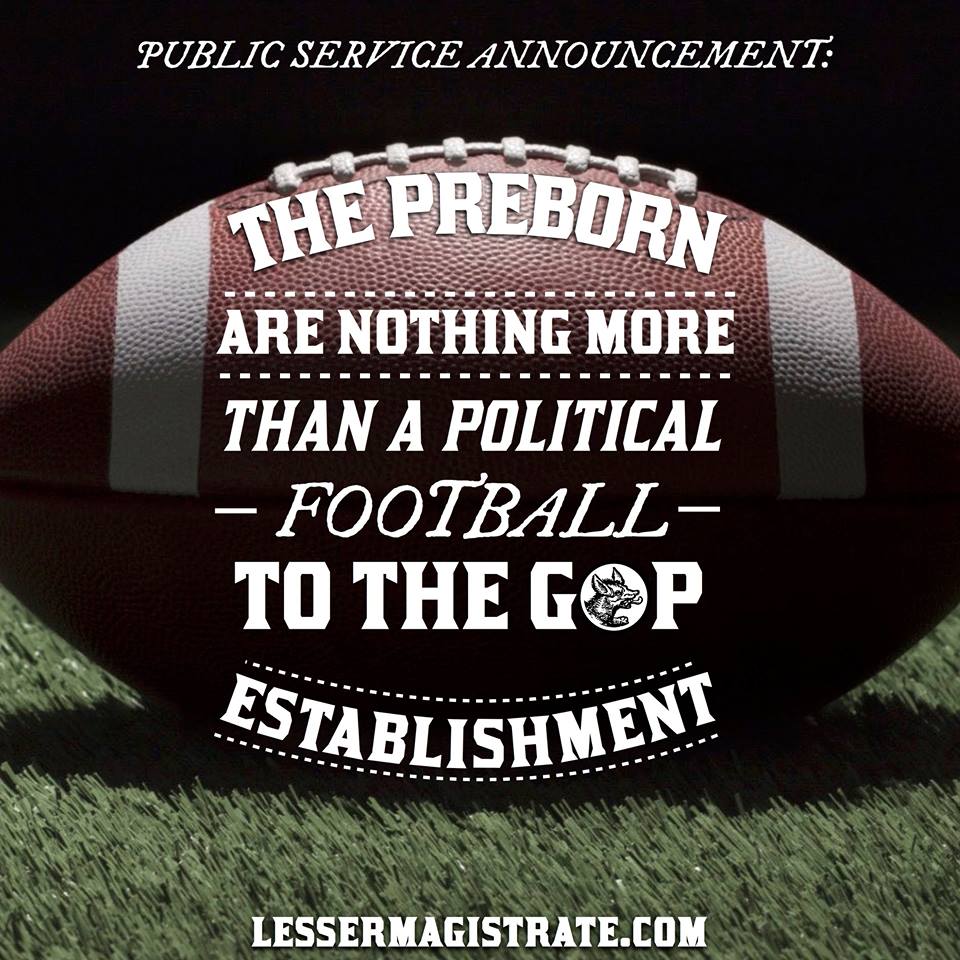 Political Ploy being Played Against the Preborn in Wisconsin

The Republicans here in Wisconsin have introduced and passed two bills regarding abortion – the Born Alive Bill and the Sex Selection bill. Democrat Governor Tony Evers has declared that he will veto both bills.

The Born Alive bill declares that if a child were to survive an abortion, the abortionist would be required to provide the child medical care. I took the time to drive to Madison and testified against this bill. The Sex Selection bill declares that a preborn child cannot be murdered on the basis of gender, race, or disability.

The Republican leadership is using an Evers’ veto to rally their base against him for the next gubernatorial election. They know he will veto anything they propose. He is the lackey for their political ends and the preborn are – once again – their political football.

Neither of these bills protect the preborn nor ends the slaughter committed against them. A child born alive during an abortion is a near-mythical occurrence and the bill relies upon the assassins to render aid. The sex selection bill simply requires that a mother or couple simply not mention that they want to murder their child on the basis of sex, race, or disability – but they can still murder the child.

Understand, the GOP leadership does not really care about the preborn. If they did, they would stop the murder. Everyone who has actually engaged the GOP politicians at the Madison statehouse knows they have no interest in protecting the preborn.

It is common knowledge that Robin Vos, Republican Speaker of the Assembly, routinely bullies any Republican politician who actually wants to interpose and stop the slaughter of the preborn.

Vos has deliberately pushed the preborn not just to the back of the bus but under the bus for years now. Vos has removed Republican politicians from committees, primaried them with his handpicked toadies, and even threatened bogus legal action against any GOP politicians who actually want to see this bloodshed ended.

Consider this Wisconsin Republican politicians: if you had done your duty and passed a law to end abortion in Wisconsin while you had the governorship and both houses of the legislature, we wouldn’t have to be concerned with the near-mythical abortion survivor because all the preborn people would be protected by law.

Once again the pro-lifers are allowing the Republican leadership to create the narrative and get them all concerned about late-term abortions rather than defend all the preborn and demand interposition and complete abolition of abortion by the Republicans that they put into office.

The GOP politicians and the pro-life groups have been playing this dopey, despicable game where the preborn are used as political footballs for GOP political ends for 46 years now. When will their followers recognize that they are being played as well?

Wisconsin Right to Life – and other groups – predictably are already busy pandering for the Republicans by denouncing Evers. This gives the phony, hypocritical Republicans the cover they need to appear against abortion so they can garner votes once again from the gullible pro-lifers, while the pro-life/pro-family groups play upon the heart strings so they are sent plenty of money by pro-lifers who keep them in business.

For decades now the pro-life/pro-family groups in Wisconsin have routinely acted as mere lapdogs for GOP politics. One day they will stand before God and have to give an account.

This bill is as irrelevant as the Baby-Body Parts bill that the pro-life/pro-family groups spent four years and hundreds of thousands of dollars trying to pass here in Wisconsin.  The failed Baby Body Parts bill would have made it unlawful to sell the body parts of babies murdered by abortion. I guess no one realized that if they simply outlawed the murder, there would be no body parts to haggle over.

The message of these current bills are simple: If you’re an abortionist and you want to murder the preborn – fine. Just make sure you finish the job or you might find yourself in some trouble. And, if you’re a mother who wants to murder her child, just make sure you don’t mention you are doing it because of gender, race, or disability.

What is needed and necessary regarding this continued slaughter of the preborn is interposition. Our state magistrates should defy the Supreme Court and their lawless Roe opinion and protect the preborn. We have written extensively at our site DefyTyrants.com to demonstrate clearly that our state officials are right to do so historically, constitutionally, and legally, not to mention biblically/morally.

Matthew Trewhella is the pastor of Mercy Seat Christian Church (MercySeat.net) and heads up Missionaries to the Preborn (MissionariestothePreborn.com). He and his wife, Clara, have eleven children and reside in the Milwaukee, Wisconsin area. To learn more about the lie of judicial supremacy or obtain the book The Doctrine of the Lesser Magistrates: A Proper Response to Tyranny and A Repudiation of Unlimited Obedience to Civil Government go to the websites www.DefyTyrants.com or www.LesserMagistrate.com.

Application of the Doctrine
Two Counties in Nevada Interpose Against a Lawless Federal Government and Their Own State
Blog
A Sermon Removed by Youtube: The Shot and The Tyranny of Man
Blog
Edenic Design and Government Usurpation
Blog
500th Commemoration Sermon: The Interposition of Frederick & Luther
Previous
Next