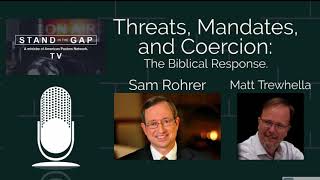 This is an 11-minute clip from an interview of Matt Trewhella on the Stand in the Gap Radio Show.

You can also listen to the entire 48-minute interview – which is entitled Threats, Mandates, and Coercion: The Biblical Response.

The interview was conducted on Thursday, September 16th, 2021.