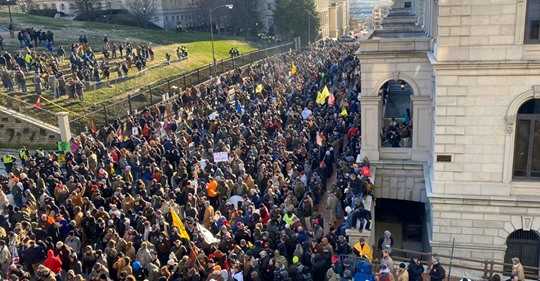 50,000 Rally in Virginia – Sending Strong Message to their County Magistrates that the People Stand with Them Against a Lawless State Government

This is a report by Caleb Green, a Virginian and brother in Christ, who was there on the field in Richmond yesterday, January 20th, 2020.

Yesterday 50,000 citizens gathered at the Virginia state capitol building. We were eager to voice our protests to a state government we believe is increasingly hostile to our God given rights and responsibilities to protect and preserve life.

But let me back up a little.

Over the past 10 years Virginia has moved from a solidly red state to a blue state. On January 13, 2018 Ralph Northam was sworn in as Governor. Yes, that Northam. Blackface Northam. The Northam that said that if a baby was accidentally born alive after an abortion, “the infant would be resuscitated if that’s what the mother and the family desired, and then a discussion would ensue between the physicians and the mother.”

In November 2019 the democrats gained control of the House in Virginia. Since then they have been strongly pushing their godless agenda. With regard to guns the following bills have been put forward.

SB: 35 allows authorities to prohibit guns from events
SB: 69 prohibits one who is not a gun dealer from purchasing more than one gun a month and sets the penalty for breaking the law as a class 1 misdemeanor.
SB: 70 prohibits the sale of any firearm, including personal sales, to occur without obtaining a background check on the buyer. Violation of this makes the seller guilty of a class 6 felony and the buyer a class 1 misdemeanor.

These have all passed the Virginia Senate and are to be considered by the House. There are others still under consideration.

Over the past few months the 2nd Amendment sanctuary movement has blown up in Virginia. 91 out of 95 counties, 15 out of 38 cities, and 33 towns have adopted 2nd Amendment sanctuary status. Local authorities are standing up to the state on the basis of their vows to the constitution. Threats have been made by several sheriffs to deputize thousands to resist enforcement of tyranny.

This has all created a perfect storm leading up to the annually scheduled VCDL lobby day. This wasn’t planned in response to the goings on. Every year men and women lobby their representatives to uphold the constitution and protect gun ownership. Every year there is a rally for gun rights.

This year, however, 20 times as many people showed up. 50,000 people, many armed to the teeth, gathered to protest tyranny. Spreading out largely to the south and west of the capitol building they filled the streets for blocks.

This gathering sent a strong message from the people to the county magistrates – we stand with you in your interposition against a lawless state government!


His royal highness King Northam made a fence to exclude guns from the capitol grounds, decked the halls with snipers, and shipped in tons of police. It must be said however that the police seemed to largely be on the side of the protestors. While there I saw no actions by the cops that I thought to be imposing on our rights, and I saw many go out of there way to be kind and helpful. They followed Northam’s orders, but seemingly through clenched teeth.

The crowds were exceptionally peaceful. No shots fired. No punches thrown. Everyone moved in an orderly manner. Trash was picked up. It was exactly what one would expect from a crowd of people genuinely wishing for a peaceful declaration of their intent to defend their rights. Were it not for the threat of antifa attacks or false flag shootings, I’ve never felt safer.

So, rallies are cool and all, but where do we go from here?

This from a local political action group:

“While the rally in Richmond was a tremendous success, it is crucial that we keep moving forward. The Governor is dedicated to his war on the people of Virginia and their firearms. The next step we take should be rallying together the counties to have one voice. The resistance of “lesser magistrates” has historically been a powerful way for the people to withstand the onslaught of tyranny.” Eli Jones, Force4America.com

Unless the impetus from state rallies translates back into votes and political action amongst the counties, this was all for nothing. Richmond has been lost for a long time. We aren’t going to win back control of the state and it’s bureaucracies any time soon. But in the counties, in the little towns and villages, we have the enemy on the run.

In order to continue advancing the cause of Christ in this area, the county supervisors and sheriffs must stand up to the state on the basis of the constitution. That will take guts. And it will be impossible for them to do so unless they know that we the people have their backs.

With their constituents behind them, they have the strength and position to defy the state beast. But even then, if one county stands alone, the state can come in and just depose the government. They can institute their own authority from Richmond and control the media spin. It would be highly illegal, but history shows lawless governments adept at half-truths and lies to justify their overreach.

The only way forward is for the counties to stand as one man against the statist beast. To do so there must be clear communications among us. We must trust each other. For that we must know each other.

Forging these alliances amongst the counties is our only path forward with any chance for success. For too long we have looked to the God-state for our answers. We have gone to where we are weak and begged and groveled for our God given rights. It is time stay where we are strong and simply say no further.

I would strongly urge you to follow the work of Force4America.com. They are working on the exact solutions the conservative movement in Virginia needs right now.